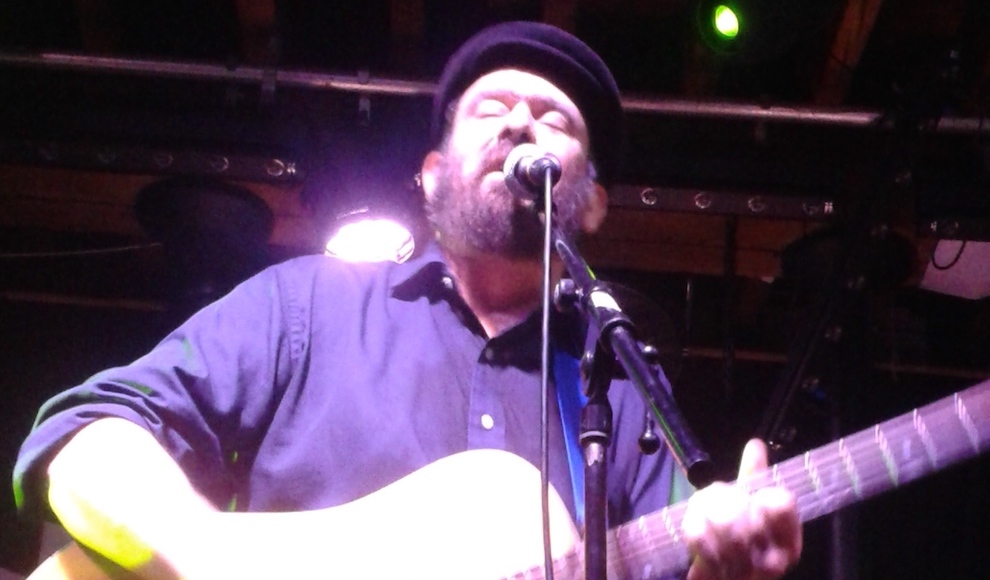 One of the overriding principles that underpins Everything Indie Over 40 is to encourage positivity when it comes to interacting about music. It’s the code of practice that embodies everything we do. From the simple sharing of songs to the features we run on social media and the articles and reviews we publish. There is enough hate going on in the world at the moment and we are certainly not going to contribute to it.

Which is why we normally shy away from getting involved in anything that we feel may be in conflict with our established principles. Gig Night, by it’s very nature, embodies those principles. A feature whereby a gig-goer, a fan, could write about a special night seeing their heroes in action. Why would it be anything other than benevolent?

However, as we all know, it is not always sunshine and roses. Sometimes your heroes can let you down.

When we read Tracey Bowen‘s review of a Mark Eitzel gig we couldn’t help but be moved by her account of what was clearly a night that held so much promise and high expectation for her, but that ultimately left her feeling emotionally confused.  We saw no negativity in the context of our carefully preserved principles. There was no hate here. Just raw feelings beautifully articulated and drawn straight from the heart. As far as we were concerned it had to be shared.

So with principles firmly set aside, here is Tracey’s Gig Night review of Mark Eitzel at The Fleece Bristol in March 2017

You’d think, with a set book-ended by ‘Blue and Grey Shirt’ and ‘Western Sky’, that I’d be happy. But happy is relative. Relative to how drunk Mark Eitzel is and how far he will go to downplay his own genius in a room full of people who were quite certain of it when they set out at the start of the evening. Tonight, despite him swearing the plastic pint glass of red wine is half water, Eitzel appears pretty drunk and hell-bent on self-sabotage.

Believe me, Eitzel is in fine voice tonight. I’m thrilled to hear songs from his new album ‘Hey Mr Ferryman’, released mere days before this gig, live for the first time. The self-analysing lyrics of songs like ‘The Last Ten Years’, ‘An Answer’ and ‘Mr Humphries’ lend themselves well to the intimate setting of this diminutive Bristol bar. They sit seamlessly alongside his majestic back-catalogue. As for the old songs, I don’t think I’ve heard a more delicately rendered version of ‘Apology for an Accident’ as tonight. And it’s a joy to hear ‘Jesus’ Hands’, a song he’s long neglected on solo outings.

It’s a shame that we’re not to be treated, as the London crowd will, to a guest appearance from Bernard Butler. Butler produced (and played much of the music) on the new record and has been credited for its lush arrangements. But Butler’s absence doesn’t detract from the enjoyment. No, it’s Eitzels’ between song banter that does that. It breaks the spell. Breaks an unwritten agreement between performer and audience.

He announces his entrance on stage tonight as “Club Firefly – the premier Mark Eitzel and American Music Club tribute band” and proceeds to introduce his current backing band as Vudi, Danny and Tim (members of the classic AMC line-up – and definitely not present tonight). The Fleece is a popular venue for tribute bands and I suppose this was part of their pre-show tomfoolery, that they’re a tribute act rather than authentic. So we laugh; a joke between friends. Only he doesn’t leave it there. He stays in character for the rest of the performance (and believe me, a performance it is). It’s hard to know what’s real and what’s parody. And I guess that’s what he intends. 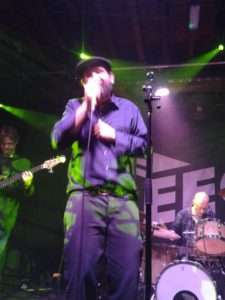 In-between heart-rending and heart-stopping renditions of American Music Club and solo output, he acts out the part of a fanboy who has direct access to the most intimate details of Eitzel’s personal life, spinning anecdotes of conversations with Eitzel from rehab, adopting a laboured raspy voice to denote the real Mark who tells us what a particular song meant to him. More facade, another mask, another cheap laugh at his own expense. Songs from the new album which they are, of course, here to promote, are introduced as “Club Firefly’s own material”.

Am I being po-faced or is the joke wearing thin? The girl behind me in the crowd doesn’t think so. She gasps and laughs in all the right moments; dutifully coos “beautiful” in a breathy voice as the last note of each song fades away. 20 years ago, hell maybe even as recently as ten, that girl would have been me; hanging on his every word and swooning with wonder even as he writhed and squirmed uncomfortably under the spotlight. But the self-deprecating act becomes tiresome eventually and I wonder where along the line he lost me, when my heart hardened beyond the point he could break it any more, when I became impervious to his words.

I realise now that parody is the new real. Club Firefly are post-parody. It allows Eitzel to treat his songs with contempt without having to take the blame. In another imagined phone call from rehab, Mark tells the Club Firefly singer to “play that song that means so much to me”. So they play the impossibly beautiful ‘Firefly’ to a hungrily appreciative and open-mouthed crowd.

I’ve thought for years that Eitzel displays an astonishing lack of respect toward his own body of work in a live setting. Maybe it’s my problem and I need to get over myself. Where do I get off thinking the songs belong in any way to me? But where does he get off behaving like they don’t? Is the “professional singer and ham” role the only way he can take something so personal on the road? If so, why bother? Because it pays the bills? I seriously doubt it does. Because he can’t do anything else? Possibly. Probably. But it’s clear the generally held reverence doesn’t sit easy with him. Never has. And perhaps his work here is done because I might finally be over my hero-worship of Eitzel the man if not the singer. Might finally let him down from his impossibly high pedestal. So here’s the deal: while the guy on stage pretends to be Mark Eitzel, I’ll pretend to be the girl behind me. We can both suspend our disbelief, just until the end of the gig. But we’ll both end up feeling like frauds. At best, it’s catharsis by proxy. At worst, an episode of Game For a Laugh gone wrong, “watching us, watching you, watching us, watching you”.

Early on in the set, he very nearly kicked that plastic glass of wine over, lurching perilously close to the edge of the stage whilst comically trying to unstick his setlist from the sole of his shoe. It was both a tragic and hilarious farce. You couldn’t write this stuff. Or if you could, it’d be the best Mark Eitzel tribute song never written.

Tracey Bowen is a yoga-loving computer programmer from Birmingham, now living in Tamworth, the ancient capital of Mercia.

She plays an odd assortment of instruments (accordion, omnichord, melodica & glockenspiel) for sometime pop-folk outfit Driven Like the Snow and has just embarked on a new lo-fi drone project with the singer/guitarist from Avrocar.

She can be found on Twitter at @INeedDirection usually very late at night tweeting maudlin indie nostalgia.

We hope you’ve enjoyed reading about Tracey’s gig night. We would love to hear about your own gig experiences whether they are recent or in the past. Please contact us if you would like to contribute, via email indieover40@gmail.com or Twitter @IndieOver40 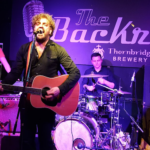 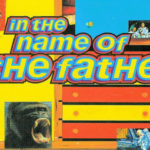