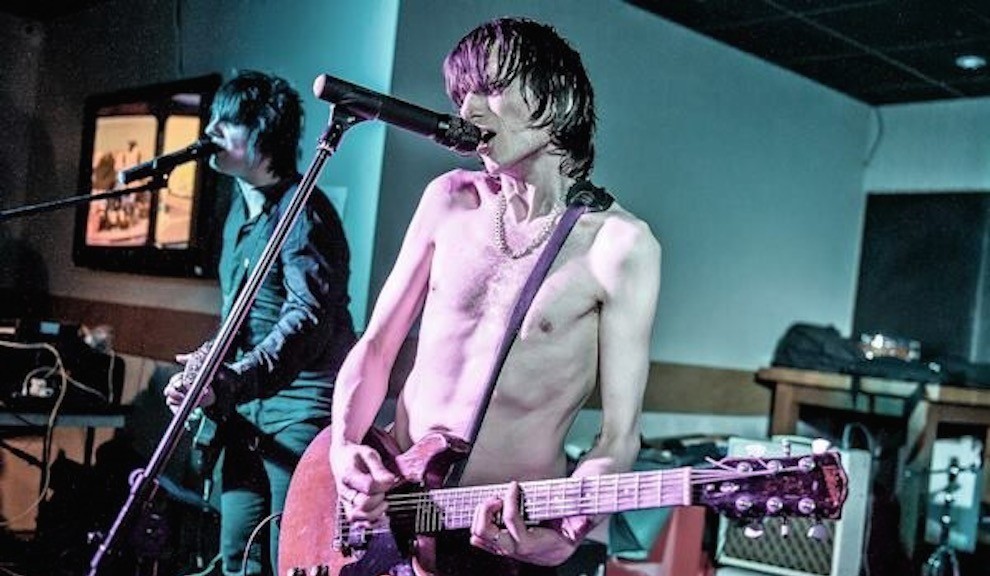 We weren’t there. We wanted to be there. We couldn’t be there. It was a gig with headliners featuring Mark Keds and Cass Browne from Senseless Things and celebrating the life of Wiz, front man of Mega City Four and songwriter and lyricist extraordinaire who soundtracked an defining era for many of us. It was a gig night down the road from us. We were gutted.

Thankfully Dawn Bovingdon (@Miss_D_xx) was there and has shared with us the next best thing. An entertaining full match report of the recent Forward4Wiz gig at Farnborough FC.

So enjoy Dawn’s gig night. It was clearly emotional.

Anyone who knows me will know that saying Mega City Four is my favourite band is a massive understatement. So when it was hinted that an event would take place in January to celebrate Wiz’s birthday, 9 years after his sudden and tragic death following a blood clot on the brain, I excitedly cleared my diary in anticipation.

As details filtered out it was announced that Blag Promotions (Pete Cole) and Rose Coloured Records (Andy Fulterer) with the Forward 4 Wiz Trust would host a gig at the Farnborough Football Club, a regular former hangout for the band. Headlined by Deadcuts, supported by I Plead Irony and set for 16th January 2016. Both bands have a close connection to Wiz.

Deadcuts are the brainchild of Mark Keds, former Senseless Things frontman, a band which toured relentlessly with MC4 back in the 90s. With guitarist Jerome Alexandre, the band also included Mark McCarthy of The Wonder Stuff. However a couple of last minute changes saw the departure of Mark M to be replaced by bassist Joseph Johns, and the brilliant addition of Cass Browne, the Senseless Things drummer. After some hasty poster changes the line up was finalised.

I Plead Irony have only been a band for a few years but have a history. I first met Rauf Jordan, vocalist and bassist, and Lawrence Arnold, drummer, when they completed Ipanema with Wiz. They are joined by Paul McDonald who previously featured with them in a band called The Fins. We’ve seen them a few times before and they played my 40th birthday party, so very happy to see them included.

I quickly realised we’d have the kids that weekend, so what better than to treat them to an evening in my world – what teenage kid wouldn’t want that ☺. Two rooms were booked at the Farnborough Premier Inn and the tickets purchased before I gave them the great news. The girls hadn’t stayed in a hotel before and were quite excited at the prospect. There was talk of ordering room service – I didn’t want to burst their bubble by telling them Premier Inn is a little more down market than that, so said I’d provide dinner.

The 16th quickly arrived, albeit with threats of snow storms, and we set off for the short journey mid-afternoon so the girls could enjoy the hotel experience. They masked their disappointment well when I produced 4 Pot Noodles and a loaf of bread as their room service dinner – no expense spared!

We booked a cab and met a couple of friends, Becki & Jackie, in the foyer. The football club was only a couple of miles away and was already buzzing by the time we arrived to a sold out crowd. Jonathon Trevisick of Feet First DJ’d between bands and was already belting out some fantastic indie tunes. We happily sang along to Carter’s Sheriff Fatman while the girls rolled their eyes and tried to disown us.

The room was full of friends who had known and loved Wiz, and most had stories of MC4 gigs and times they’d spent with the band. MC4 were represented on the night by the band’s drummer Chris Jones (who doesn’t seem to age), Karina Chillman – Wiz’s then partner and F4Wt trustee, and Dee Terry, Gerry Bryant’s missus, as Gerry had a prior engagement with a football match. The atmosphere was emotional, a mix of joy – celebrating great music and wonderful memories – with sombre overtones. Two screens showed video clips and photos of MC4, Ipanema and Senseless Things as a reminder of the past, while the night and the purpose of the F4Wt was about looking forward with new music.

I Plead Irony took to the small stage at 8.30pm. Rauf was wearing one of his customary Shite Shirts, I believe bought especially for the gig. The band go from strength to strength. Kicking off with Now or Never, the opening track from their first album, they grabbed the audience’s attention. The new material sounds fantastic and What If, my current favourite IPI song, was up next. Those that knew the lyrics sang along, others just moved to the music. 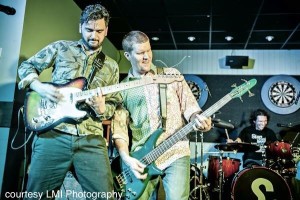 The rest of the set continued at a pace with the band obviously enjoying the night, sounding competent, confident and very loud. As their time drew to an end there were calls for more and, to the delight of the crowd, the band launched into a cover of Mega City Four’s Miles Apart. Ending their set with gig favourite Wrecking Ball (no not the Miley version), the band finished on a high and headed for the bar. I Plead Irony’s 2nd album entitled The Solution is the Problem is released in April. I’m singing in a crowd backing vocal bit on one track but don’t let that put you off, you can’t hear me ☺. I’ve heard a demo of the album and it’s a must buy.

All profits from the gig will be donated to the Forward 4 Wiz Trust, set up in his memory to support new and aspiring musicians in the area. Both bands had donated merch towards a raffle prize, along with Stuffies and MC4 items. Pete Cole drew the winning raffle ticket. I didn’t catch the name of the guy who won but he walked away with some fantastic goodies I’d had my eye on.

There was a DJ interval between bands where curry was served from the back of the venue and we tried to chat to friends over the loud music, resorting to a weird form of made up sign language, ending in shrugs, before heading to the bar to stock up on drinks instead. The youngest did her best moody teen impression until her request for a Muse track was played and she started bouncing around grinning.

Deadcuts were due on stage at 10pm however at 9.50 we started to worry as no one had stepped on stage since the raffle was drawn, and our cab would be arriving at 11. 10pm arrived with Mark and Jerome taking to the stage to set up their equipment and 10 minutes later the band were ready. I’d only heard a couple of songs prior to the gig but liked what I’d heard. With a sound far removed from the poppiness of Senseless Things – Deadcuts have a much darker, heavier quality to their songs. Keds’ lyrics draw on his life experience and listening to them feels almost like reading his personal diary. Jerome is a very strong guitarist and his style perfectly complements Keds. It’s fantastic to see Cass back on drums and he fits naturally into the band. The girls were very happy to see Joseph on stage and he was the highlight of their night (makes a change from them crushing on Matt Bellamy!).

Whilst a fairly new band they are already building a strong following based on quality songs. Their set opened to cheers with Praying for Jail, moving into Less I Want Less I Need. Mark decided to make a few costume changes, not easy on a small stage with no changing area. Starting the set shirtless in a long black coat, switching to a Bowie tribute Blackstar knitted jumper and finally a suit jacket. 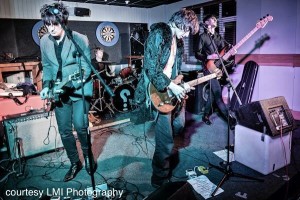 I got the impression Mark seemed a little uncomfortable or nervous at the start (possibly due to the fact it was in memory of a friend) but the band quickly settled in and each song sounded better than the previous. Opium Styles and Brittany Murphy were fantastic with, what I feel is their best yet, Summon the Witches – a song with a guitar hook that stays with you for days. This was followed by new track Dope Girls which I’ve since had to order.

As 11pm neared Mark stood quiet while the crowd cheered and waited for the noise to die down, before reading the lyrics to Mega City Four’s Less Than Senseless as poetry. A song written by Wiz for Senseless Things. It was beautiful to hear and the emotion in Mark’s voice was audible. To finish the set Deadcuts launched into the faster paced Kill Desire. They’re a band I’d strongly recommend seeing and who are currently touring with The Libertines (Mark co-wrote Can’t Stand Me Now).

By now it was just after 11 and our cab was waiting with the meter running. Pete Cole and Karina Fraser stepped on stage to close the event. Karina spoke from the heart to thank everyone for coming together, celebrating Wiz’s life and contribution and for supporting the trust. As it was Danny Brown’s birthday (Wiz’s brother and MC4 guitarist) who had moved to Australia last year with his lovely wife Roxy, we didn’t want to leave him out so the gig finished with a group chorus of happy birthday, filmed and uploaded to FB for him to see. 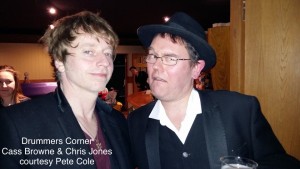 As my family and friends dashed out to the cab before he gave up and left us, I just had time to say hello, great gig and goodbye to Mark Keds before joining them and heading back to our hotel. It was a fantastic night and flew by all too quickly. Most importantly £500 was raised for the F4Wt. Let’s make it an annual event.

Enjoying myself too much, my slightly drunken pics were pretty poor, and I can’t stand still at gigs, so I won’t inflict my efforts on you (bar 1 Adrian took). Instead professional photographer, Dave Vokes of LMI Photography, has kindly shared a few pics of the bands. Enjoy!

We hope you’ve enjoyed reading about Dawn’s gig night. We would love to hear about your own gig experiences whether they are recent or in the past. Please contact us if you would like to contribute, via email indieover40@gmail.com or Twitter @IndieOver40 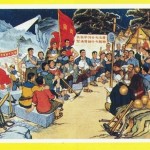 On An Indie Island With You – Seb Gevers
Next Story » 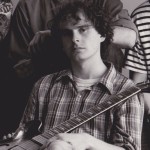